Disclaimer: I like both Rihanna and Beyonce just about equally, for different reasons. But I am in no way a stan for either.

I was rooting for Rihanna… I really was.

And even though I’ve made fun of her in the past, I was genuinely happy to hear that she won the esteemed Michael Jackson Vanguard Award the night of the MTV VMAs. I mean after all, the chick works hard so I can’t take that away from her.

But as I watched her sorta pitchy sing her last group of songs prior to her acceptance of the award, I couldn’t help but think it wasn’t her night.

But it was supposed to be.

It wasn’t her night because MTV PLAYED #PETTYWAP to the Nth degree with the way they set the award show up. There were too many other things I and everyone else who watched will remember more than RaspyGalRiRi’s 4 performances throughout the night because, welp, they were just that noteworthy.

Below, I will list the five things (in order of performance) that trumped Rihanna’s Vanguard moments that made us all forget why she was there.

…….because any person that can make you feel like you are actually listening to the 4 ft “Chocolate Droppa” with closed eyes, deserves recognition. Period.

The whole time I watched Teyana all I could think of was :

“Was this video shot after she had Junie?”

“Lord how will I find out if this is Teyana Taylor pre baby, or if by some miracle of Yeezus, this girl dropped all baby weight and was left with fat in all the right places?”

The curiosity plagued my soul. Not to mention, all I saw was BODY. And I’m not too sure….but if I remember correctly, I think Teyana had some bomb choreography in there too. But….HER BODY was……just wow.

And then when little Junie popped up on the screen towards the tail end of the video every woman in America sighed with anxiety. I mean sure, we got our answer, but we couldn’t wrap our minds around it. It seemed impossible…enough to make us want us to scream “photoshop!”.

But it was real. Teyana Taylor dropped a human being 8 months ago and has the body of Lara Croft…and I….I sit childless, with the half a roll of ab fat I’ve had since forever.

Sunday night Teyana Taylor made every guy want to be with her and every girl want to be her.

I would’ve loved to have been a fly on the wall when MTV arranged for Beyonce to perform. I’m sure someone told her Rihanna was performing four times throughout the evening, to which she likely responded like this: 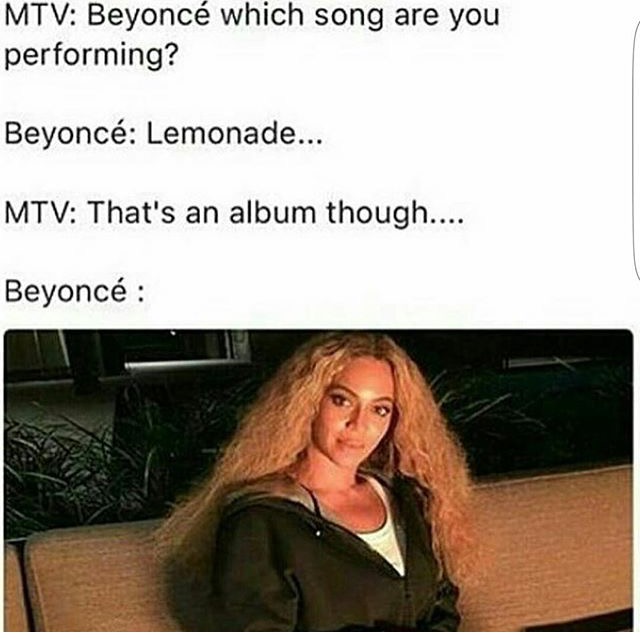 But something magical happened during her performance. Non Bey-hive believers warmed up to Beyonce immensely if not completely converting to the hive. The Beygency was bored out their minds because they had no one to troll. She took longer than all of Kanye’s VMA rants combined to FLIP THE SHOW into the Beyonce concert, and everyone INCLUDING MYSELF, WAS HERE FOR IT. 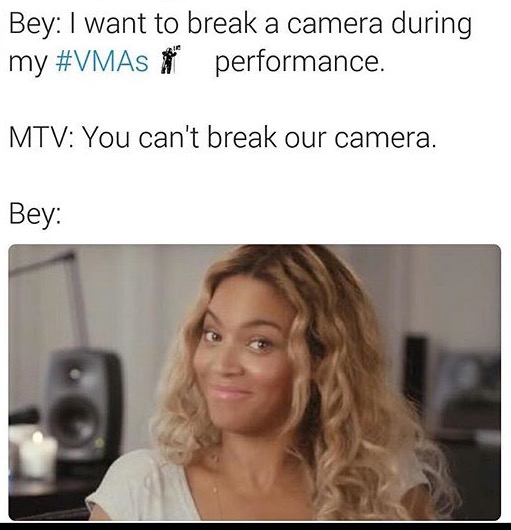 The flames, the imagery, costumes, and the mythical aura, seeing Lemonade in a live performance was all so ethereal, and haunting, and enchanting at the same time.

It was weird. I can’t even really express what I was going through watching Bey perform. But I do believe the moment I embarked upon was that of crossing the threshold of when a non-fan becomes a fan. It was like an instantaneous out of body experience where I had no control over anything. I SWEAR IT WAS THE ILLUMINATI.

What was even more bizarre was that everything that had to do with Bey following her performance made me like her more. I loved her gold ensemble she accepted her award in. I admired the way she worded her short and simple acceptance speech. And I even caught myself tweeting this:

What DAFUQ? What was going on with me? (no really, I SWEAR IT WAS THE ILLUMINATI.) It was like I’d become a full blown honorary hive-member in less time than it took for Yeezy to say “Bro” and what was even weirder was that I didn’t have an issue with it.

Sidenote: Notice how I haven’t called her Beyaki not once in this post. I’ve come a long way.

Beyonce kilt (aka higher level of killed) the VMAs. BEYONCE MADE RIHANNA, THE VMA’S, AND HER FOLLOWING ACTS HER B*TCH AND NO ONE COULD STOP HER.

Let’s face it, Britney was meh-point-5 at best. The chick stiff shimmied to her choreography circa 2008, and mouthed out her lyrics almost as good as me during my 7th grade lip syncing competition…per usual. The performance WAS PER USUAL i.e. it was nothing extravagant to write home (or even here) about. I mean I’m not really into the 2016 Madonna, but I almost wished she would’ve come out to tongue her down again just to jazz ish up. It wasn’t bad, just went the complete opposite direction of where lit was….

And as much as I want to tell myself “Well anyone is going to naturally look like they sucked after Beyonce“, that wasn’t all it. We really couldn’t blame Queen Bey entirely for Britney’s usual mediocrity. MTV’s placement of Britney’s performance directly after Bey made it completely impossible to not draw a comparison. Much like Jordan returning to basketball in 2001, performance wise, Britney showed the world she had officially surpassed her career climax.

The situation was all too reminiscent of when we were in school…There was always that one overachiever in your class… you know, the one that would usually be responsible for making the curve all sorts of flic-ted when it came to test scores. Now imagine that same kid presenting their science project to the class, and they did more than just a tri-fold board with an explanation. They had pivot tables, live samples, accompanied by a personal video from Bill Nye proving their hypothesis to be correct… like the kid practically discovered the cure to cancer!

Then here comes Britney with the tri-fold….

Diddy was actually keeping it real when he said Drake was stuck in traffic. Because when Drake showed up to present Rih Rih her award…….beyyy-behh I think we were all a bit surprised.

And Aubrey came, all 6 feet of his light-skinned-Keith-Sweat-prom-suit-glory self to basically tell the world what we all knew: that if given the chance, he would love to be Robyn Rihanna Fenty’s man.

He even went as far as to dismiss all of his old heauxs. ALL OF THEM (see here for the complete list) from Courtney from Hooter’s on PeachTree, to Bria at the Beverly Center, including but not limited to the countless, nameless, fat transferred video vixens he smashed, sung about, or took to tropical getaways a la Bernice Burgos just to put himself on blast.

And what was most notable for me was here was Drizzy claiming to be in love with Rihanna for the last 7 years, when Serena Williams, his ex from just last year, was sitting just a few rows away.

And then there were questions, so many questions we all wondered:

Was Drake going to propose?

Was Meek Mill going to meet him outside afterwards for their long awaited scrap?

And then it seemed we all got some answers when he tried IT in front of the whole world and got his behind curved.

Let’s face it. Rihanna is a smart girl, and there are two very important things she knows:

But these reports say otherwise, so who really knows the deal? Though I wish them both the best, at the end of the day it all doesn’t matter, because Yonce got the last laugh. 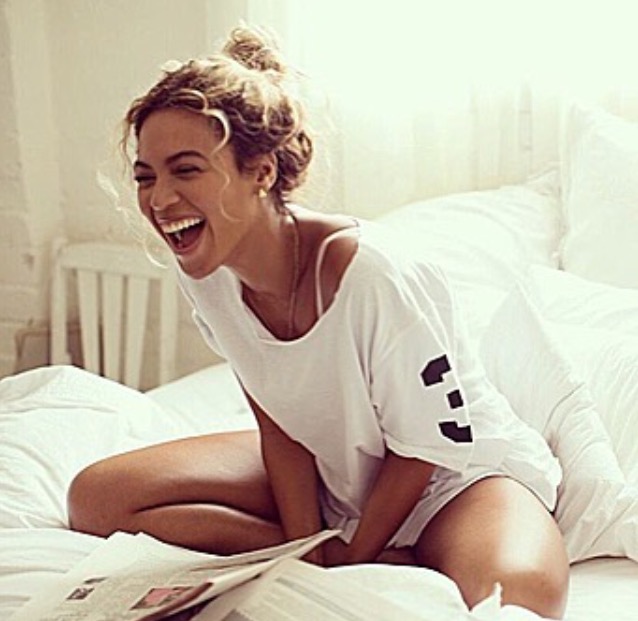