Thoughts On the Yeezy Season 4 Show, From An Ex Yeezy Model

First, let me just keep it 100 and say my title is a bit deceiving. I’m not a model by any means, but in February of this year, I was cast as one in the Yeezy Season 3 show. And besides my co-workers and people close to me, I haven’t really spoken about my experience as a Yeezy extra. So I figured I’d do a compare and contrast of the four things that made Season 3 different from 4 ….and the same.

My Experience: If it wasn’t for my co-worker telling me about the casting, I would have never been in the show. She saw an ad for YzySzn3 casting extras to attend, and this is how it looked:

Keep in mind, due to an email sent afterwards mentioning something about us being audience members, the majority of the extras were confused about what we’d be doing within the show until we got to Madison Square Garden the morning of it. And even then we didn’t know what the heck was going on.

So the afternoon before the show, I created a profile on the site the ad was on attaching a simple low quality selfie I took on my iPhone 5. Late that night I received a confirmation email, and even later that night (around 2am…5 hours before call time), I received another email with the details on where to show up, time, and what to bring/wear….but telling me nan a thing about what I would be doing.

YZY SZN 4: I wasn’t aware of this season’s casting call until after it happened. But from what I learned, at least this season, the audition requirements for extras were more explicit. Kanye, with the help of his artist friend, Vanessa Beecroft (who has claimed that she becomes black while working with Kanye) explicitly stated they wanted “Multiracial women only….” which caused a sh*tstorm of backlash. Everybody and their mama was confused about what “multiracial” was supposed to mean, and more importantly who it excluded. Though hundreds of girls of all looks still showed up for the call to wait in line for hours only to be turned away, some let their presence make a statement. 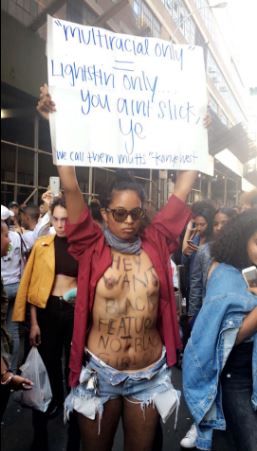 Model rioter in line for the casting wrote “they want black features, not black girls.” over her bare torso.

Come showtime, it was apparent what Yeezy really wanted was women of color of all shades…but for some reason Kanye and Beecroft couldn’t think up such a simple less-offensive label on their own.

Honestly if you truly want a full recap of how much of a hot azz mess the casting was, click here for a first hand account from the blogger who came, never got seen, and got conquered instead.

My Experience:  Our phones were confiscated by the Yeezy team promptly after boarding the bus at MSG. Once our buses arrived to East-on-the-edge-of-nowhere-Jersey, we entered a stark warehouse where we would stand in gender separated lines for a good 45 minutes. All of our eyes were wide with shock when we saw the racks on racks on racks of clothing all arranged by shades of burgundies, browns, mustards, and creams. “We were all getting Yeezy gear!” we said to each other with excitement….until we got closer, and were each assigned an outfit we had to try on in front of everyone. We got a look at the labels. It was then we realized the whole idea of the clothing was to make it look like were were wearing collections of Yeezy’s past, when we were really wearing Goodwill. 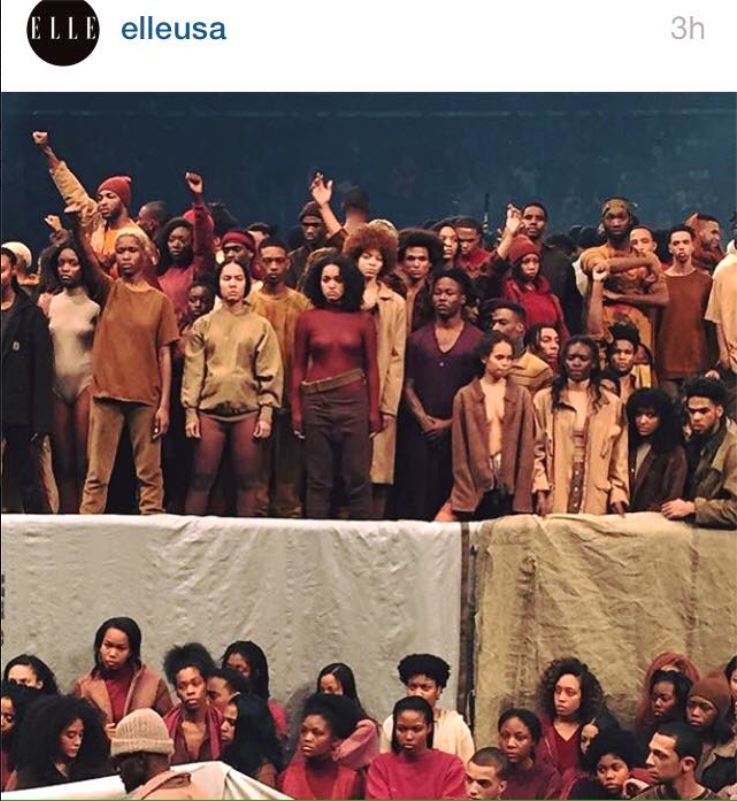 Lower right, first girl against the dark taupe tarp w/ the v-neck….that’s me.

After getting dressed we were instructed to place ALL of our own clothes, purses, bags, and other personal items in Hefty trash bags where we surrendered them to the crew until the remainder of the day. And if you think accidentally leaving your phone at home is a crazy feeling, imagine not having your phone, clothes, money, wallet, not even an ID on your person for 15+ hours, which is how long our day ended up being.

YZY SZN 4: I get it. Kanye is a self proclaimed visionary. According to him he invented the leather jogging pant, and inspired the masses to wear retro Jordans! Because we all know Jordan sales were down before prior to him…Insert.Sarcasm.Here.

Yes Ye, you are the best at creating a whole new genre of apparel from neutral leotards a la Capezio, to off-neutral tights….a la Capezio.

To keep it real, there really is nothing wrong with Ye’s line. In fact it’s actually refreshing to see how stylish and bold of a statement one can make in a rainbow of neutral monochromatic palettes without relying on patterned or bright fabrics. And I seriously say that with all complete sincerity.

But his collections have “evolved” into a term I’d like to coin as TRASHION (that’s trash + fashion for the word math illiterate). Because in the sense of his line’s evolution over the course of two years, there’s hardly been one. Every season feels like a mind-screw of Deja Vu. We anticipate predictability, we just assume the presentation of it will be different. And as a result, every season we literally have to sit there and say to ourselves:

“Aren’t these the same clothes as last year?”

“Oh wait, they are different…last season he had tan bombers and these season he has dark taupe ones.”

Ack-ha Kanye! I see what you what you did there……you were just trying to make sure we were paying attention.

Here’s a little pop quiz for you: 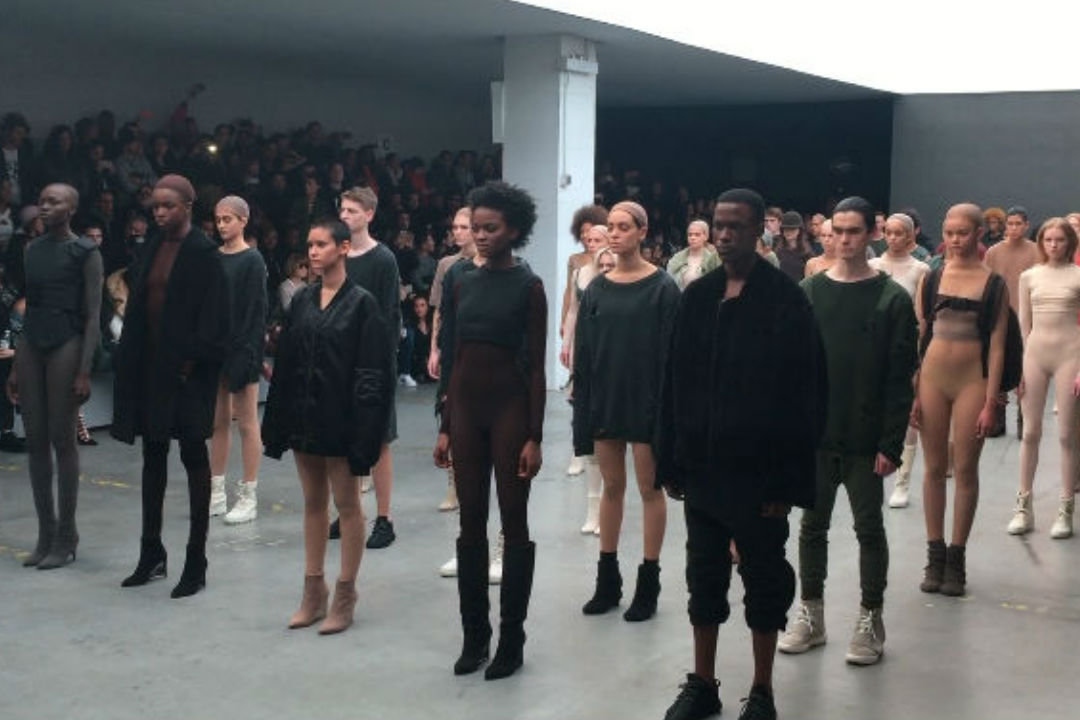 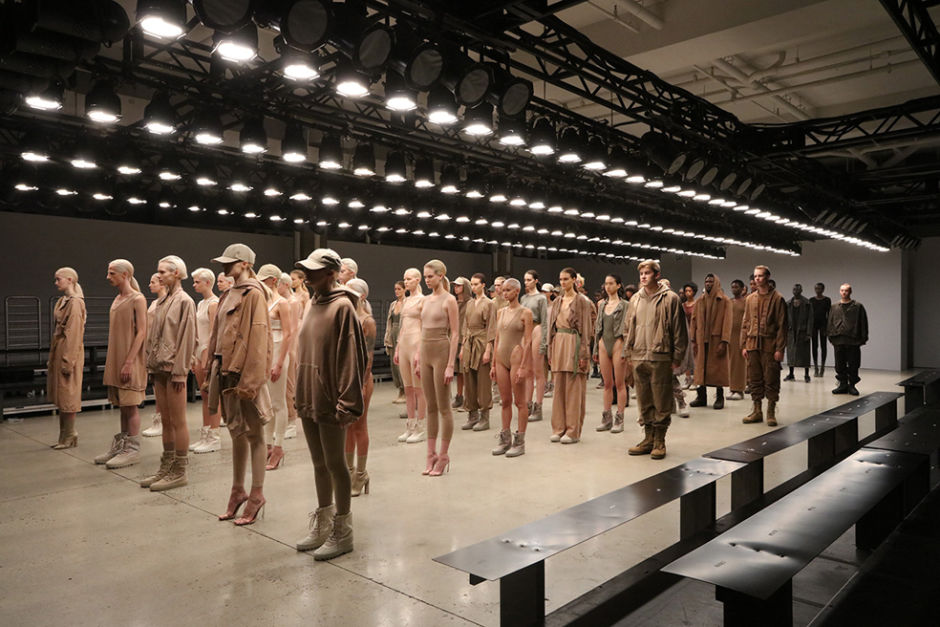 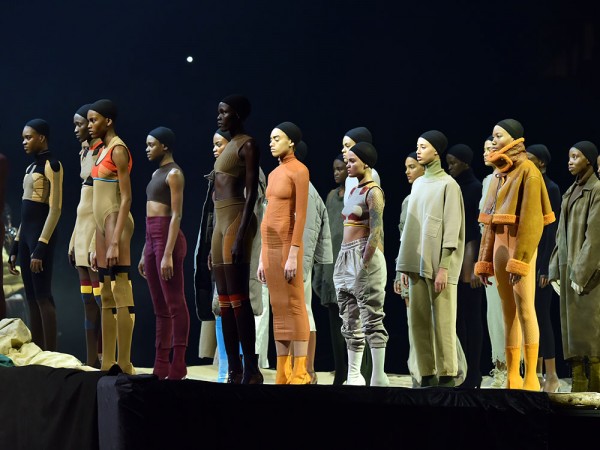 It seems that that the only thing Kanye changed from previous seasons to this current one were the shoes….

My Experience: Like stated before, us extras didn’t have the luxury of wearing Yeezy’s line, so when it came to shoes many were gifted brand new Superstars and other Adidas varieties to wear with the second-hand fashion…until they ran out. I was one of the unfortunates who wasn’t able to score proper footware, so I walked around only in itchy wool burgundy socks…..the ENTIRE day.

YZY SZN 4: All I can say is it is now apparent why Kanye’s models have never had to walk for the past 3 seasons.

As a designer, you know your line has officially failed when Bruce Pask, the men’s fashion director of Bergdorf Goodman, has to help escort your model off the stage because the 4 inch stiletto heel of her shoes breaks and becomes parallel to the ground…preventing her from finishing her strut on her own.

By a raise of hands, who’s paying two months rent for these shoes???

And as a designer, you know your judgement in casting may have failed when your own muse, walks two-thirds of your extensive runway in your sturdiest shoe like she was cast as a zombie from “The Walking Dead” all before promptly struggling to kick them off in frustration, doing the rest of the runway barefoot…

because her feet were Sweaty. WTF?

To give Amina the benefit of the doubt, we could say: yes it was a sunny, 88 degrees that day and yes, she was wearing plastic shoes. Any girl who has ever worn a jelly sandal ever in life could have predicted the outcome . But the way she kicked them off was the opposite of glamorous or discreet to say the least.

Kanye decided to have his very first runway show where models actually walked and it ends in this disaster?

My Experience: From what I heard, the show began a little late. How late? I have no clue (remember I had no phone to keep track of time). All I can say is that based off of what the show coordinators told us, we were standing for 2 hours under a metal tarp before the show actually began. Add the hour plus long album listening session/fashion show time and it totaled to 3+ hours of us standing like a statue. And it might be worth mentioning that Kanye took the whole “Don’t feed the models” thing to heart, as our call time was at 7am, lunch (which consisted of a 6 inch sub, and apple or orange, chips, and a bottled water) was at 2pm, and were not able to leave the premises until after 10pm. Now I see why real models are always so hungry .

YZY SZN 4: After being transported to Roosevelt Island in hour long trips by coach buses, the Yeezy guests arrived (some earlier than others) not knowing they would then have to wait up to 3 hours in the blistering sun for the 10 minute show to begin. The show was slated to begin at 3pm and at 4:40 the first model hit the runway.

Prior to 4:40, the Yzy Szn 4 extras stood…in that 88 degree weather….some collapsing into a faint from dehydration. 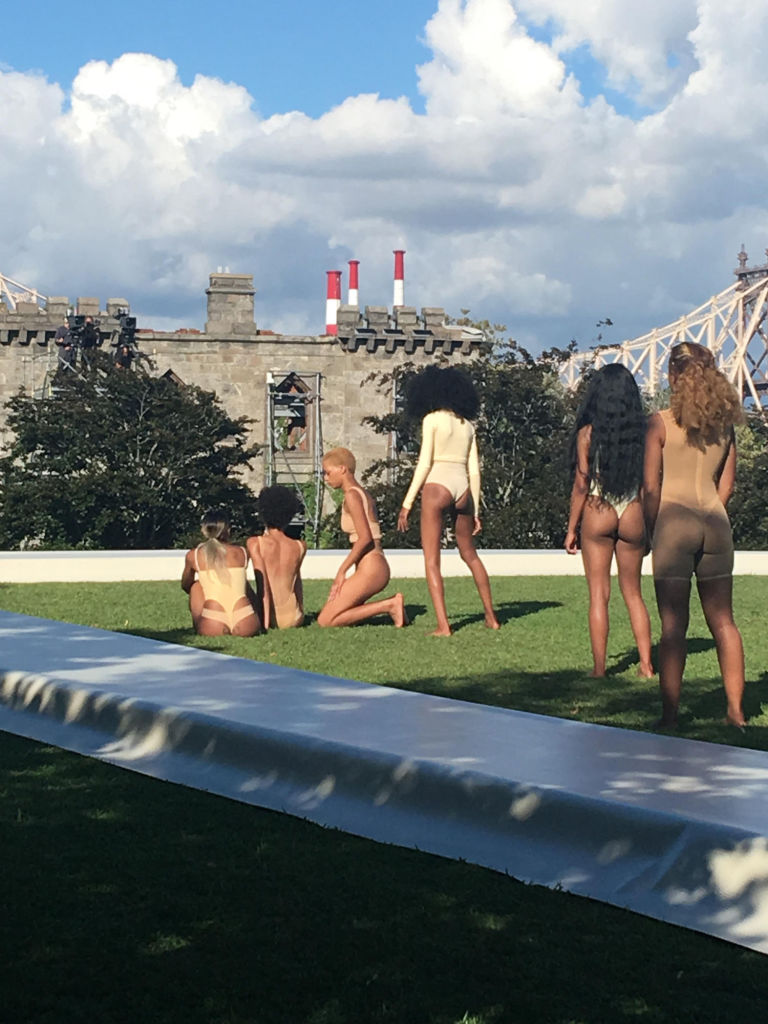 One of the major editors from New York Magazine live tweeted the event reporting: 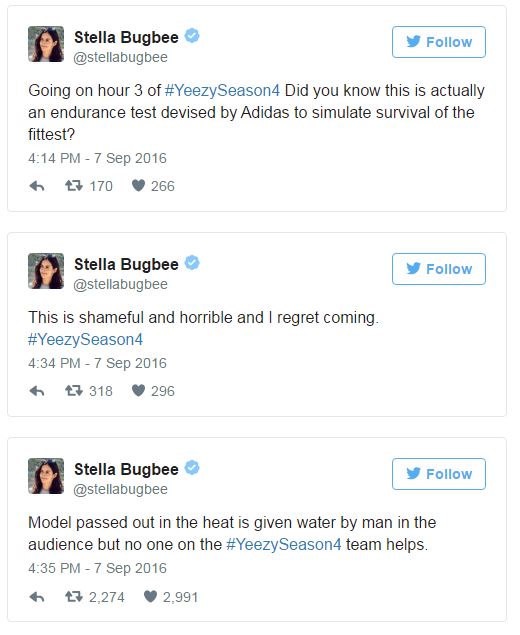 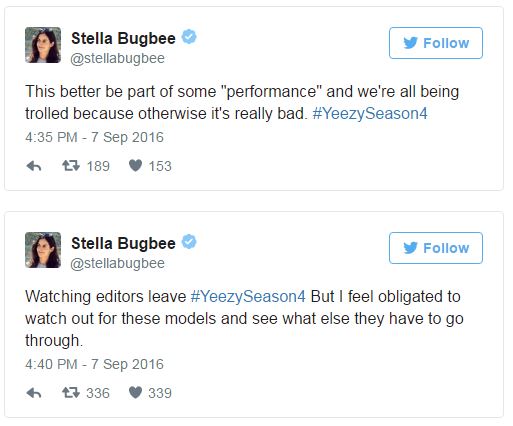 Now while that whole dehydration scare would’ve definitely worked for Kanye’s vision for Season 3 (we were told that we should act like refugees from a Rwandan camp), I doubt that was the concept he was going for this year.

But even more fascinating is that Yeezy show regular and Editor in Chief of Vogue/Artistic Director of Conde Nast (i.e. Devil Wears Prada) was in attendance and I’m pretty sure she had to wait as well. And what do you call making Anna Wintour wait outside in summer heat for hours for your show to begin?

But the biggest difference between Season 3 and Season 4 would have to be the reaction of the show not from the consumer perspective, but from the people who mattered most: the slew of editors, buyers, and other prominent fashion figures who took to social media to express their frustrations.

And while writing this post, I’ve come to realize, as dented of a can as he is… Kanye is a visionary. Kanye West is a genius.

It didn’t matter if you were Anna Wintour, or if you were the 22 year old “multiracial” woman donning a nude leotard standing in formation in the sun with the others. Call it a trap, a social experiment, or sheer brilliance, Kanye West found a way to bring his “trashion” experience full circle. From being shuttled to an unknown place, to playing the waiting game in unbearable conditions, to being placed in a situation where they had absolutely no control of time, along with limited free will- for 3 hours Yeezy Season 4 gave the most affluent, powerful, and influential people in the fashion industry a glimpse of what it actually felt to be a Yeezy model extra, completely diminishing the hierarchies of fashion.

And they weren’t having it.

You DID THAT. And now I get why little Northie wasn’t in the Season 4 audience…. 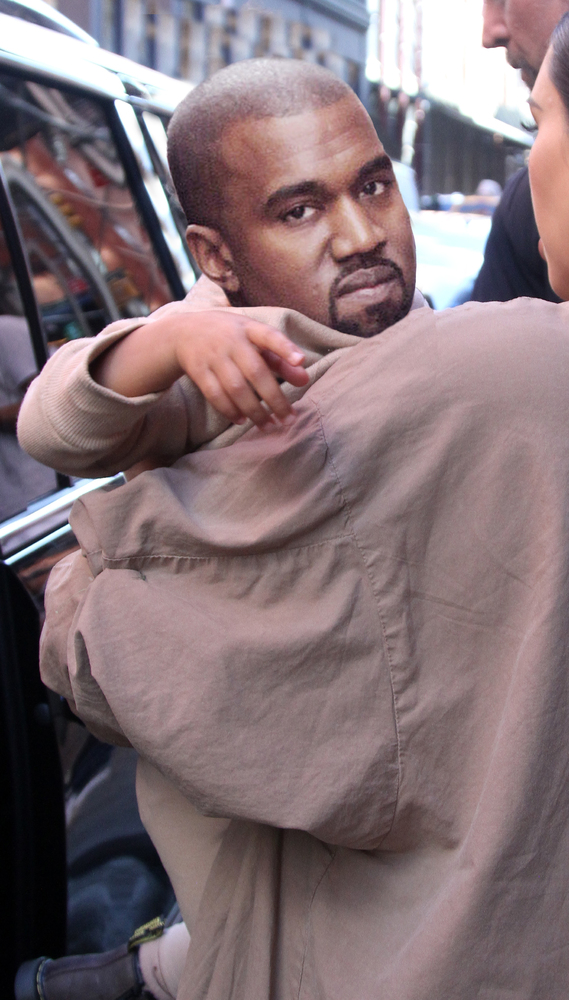 …I mean she’s not about that peasant life. 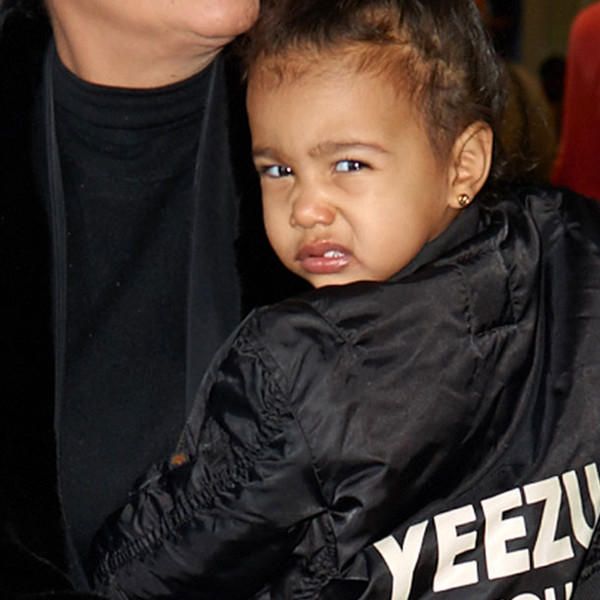