When It All Falls Down: Stacey Dash

While this is a term is usually used to label a male, one person’s mere existence is proof that this term could in fact be used universally:

The walking hypocrisy, that is S.t.a.c.ey.D.a.s.h…

Because in the interview above, Dash uses roughly over 3 minutes of precious time that we will never get back, to show America once again, that she is a complete waste of melanin .

Stacey has shown time and again that she absolutely has no regard for her Black community. So any of her Uncle Tom commentary regarding important advancements of it, should barely come off as a shock.

“Because we have to make up our minds. Either we want to have segregation or integration. If we don’t want segregation we need to get rid of channels like BET and the BET awards and the [NAACP] image awards….where you’re only awarded if you’re black…”

Since it’s apparent this chick is immune to truth, let’s just do some major fact checking:

-BET has been a White owned company for 15+ years.

-Two of the three NAACP cofounders were Caucasian.

-There have been a plethora of White celebrities who have been nominated or won several BET and NAACP awards throughout the years like Sam Smith, Steven Spielberg, Justin Bieber and t Iggy Azalea to name a few.

But for her to spew out 100% falsities to make her points appear valid?

it’s to be expected.

What confounds me the most, is how this woman used whatever shreds of dignity she’s managed to salvage from said coonery, to burn the very bridges that opened doors to a career any actress of her mediocrity would be lucky to have.

“If it were the other way around we would be up in arms. It’s a double standard.”

I’m sorry, but when did pro-Black become anti-White Stacey?

Was it a double standard when you posed for this?

Or was it when you were on the cover of this Black publication?

“”Because we have to make up our minds. Either we want to have segregation or integration.”

That never stopped you….

from gracing the cover of KING’s competition, Smooth…

Oh I get it Stace. It’s okay to “segregate” yourself when you’re scrounging for coins until your come up.

Speaking of coins…don’t you owe somebody money? 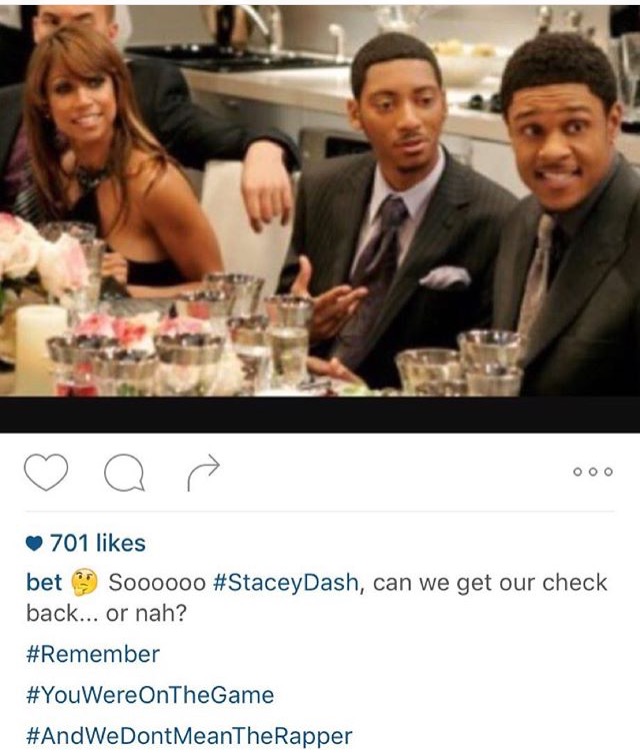 My question is, how could this chick disassociate herself from the only platforms that allowed whatever relevancy she could grasp post “Clueless”, to continue for two whole decades?

And after further deliberation I’ve concluded that it only makes sense. We cannot expect anything positive from someone who has nothing to lose.

We can’t expect anything from a woman who’s only passing grade in life was on a test based solely off a brown paper bag.

And we most definitely cannot expect ANYTHING from an ex “actress” turned Faux News slave muppet, whose biggest most recent claim to fame is appearing in “Nora’s Hair Salon 2”.

Even her cousin Damon agrees (8:33 mark)

If Stacey wants to be classified as a “raceless/cultureless” American a la her little minion Raven Symone, by all means I encourage her. Because we, the Black people in America have made up our minds. We’d like segregation —- from her. Besides, Dash’s Black card was revoked years ago , so the further she disassociates herself from us, the better.

Though a small part of me is thinking…maybe….just maybe, Stacey’s on to something.

Maybe we should’ve gotten rid of these Black outlets long ago. Because had we not had any of the publications she was featured on, or had we not had BET to fill their Black History Month programming schedule with the slew of stale azz made-for-tv movies she starred in, Stacey Dash would not exist.

Hey, I have a novel idea. How about we keep BET, the NAACP, and Black History Month, and get rid of Stacey Dash?

Is it too late to get Rachel Dolezal back?

Because at this point, this is

Let’s please keep in mind that not even a few weeks ago did you get suspended for talking badly about Obama. So if I were you “Miss Thang“, I’d tread lightly. Because when your Faux News massa kicks you off the plantation, you’ll really have nothing to lose.

But not to worry. Because when it all falls down, BET won’t be there to catch you, and neither will the Black community.

As your colleague put it, “Good luck to you today…..and everyday.”