Watching Kawhi Leonard the past three finals games, inspired this post. Actually watching his cornrows, is what inspired me. You see, I have this firm belief that certain trends from the past shouldn’t trickle down into the future. FUBU outfits being one of them… Baby Phat and Pelle Pelle too (sorry Scrappy). Pastel bubble coats with matching Wally’s could be another (it’s a Chicago/Midwest thang). But I could go on and on.

Now I should probably lay off a bit on the brotha.  I mean he is only a fresh 22 years old. And we don’t even want to talk about my own lack of style sense at that age. Not only that, dude hails from Riverside CA, one of the biggest non-fashion capitals of the world, only to move to San Diego (another non-fashion capital) to play at SDSU, to finally end up at San Antonio, which has well…let’s just say, almost the same vibe as San Diego.

And saying all of this is not to discredit his skills on the court. The kid IS the youngest player to win Championship MVP in forever. And yes, that will always mean more than how the dead skin cells on his head are styled. It’s just that I think a petition (that’s yet to be created) for a grown man to cut his braids off trumps any petition created for a baby girl’s jazzy lil’ uncombed fro. Because under all that delicately parted hair, he has the utmost potential to be a little tenderoni. And I absolutely hate to see a good tenderoni wasted.

But his post ain’t about how cute he is.

This post is to highlight the concern I’ve had over the years with players’ off court style choices.  With the end of the NBA season, we can anticipate press conferences and interviews. Which means there’s a greater chance of seeing more tom-foolery wardrobe pieces from our favorite players  there and within their paparazzi sightings. Let’s start from least concerning to most, with fashion offender numero 3: 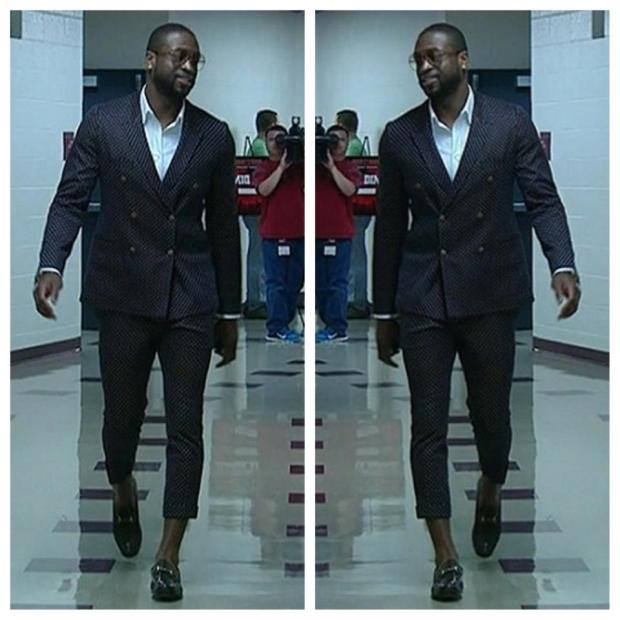 All I got to say is where are the rest of your pants Dwayne? I have a feeling you copped that suit at regular pant length, and was feeling “artsy” one random day, and decided to have 6 inches cut off and cuffed. But why doe?? I appreciate you slathering on the Johnson’s & Johnson’s baby oil all over your ankles prior to rocking these out …but sh*t, that was least you could do in this sitch.

Okaaay Wade, we ain’t even gonna touch on how you ransacked your oldest son’s closet for your OOTD. I’ma say nope in your white tee! I’m confused. First you cut off the bottom of your dress slacks to show your no sock wearing shiny azz ankles, and now you’re scrunching up your sweats to show your socks? This truly wasn’t necessary…. Wait- are those socks special edition Arthur Georges? Ohh I get it.. you’re giving Rob Kardashian some free brand advertising to help him through his tough times huh? Because at this point it’s either that or you’ve got a major ankle fetish D.W…Hold up, let me hit up Gabby and Aja and ask them…

And for numero dos:

I gotta bow my head and shake it. This really, reaaaallly pains me to my heart’s core to even place him in this post, because to me this man right here? This man right here is the epitome of FINE. And like all FINE specimen of the opposite sex, we want to grant them passes for their shortcomings. But I can’t this time. I.Simply.Cannot. 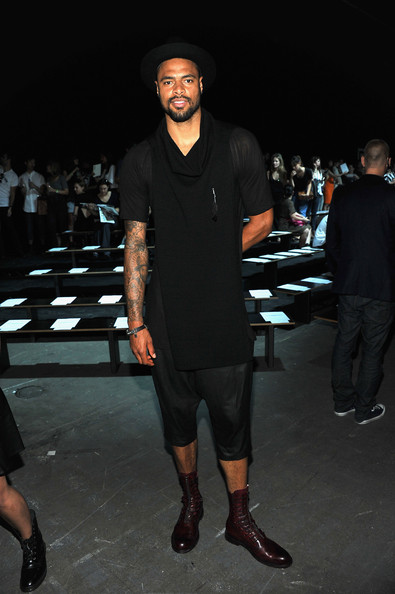 See um Tyson, this is my issue with you and your garb. While I know you are heavy on the fashion circuit (the first pic was taken at an Alexander Wang show), You are 10 feet tall, so…honaay… you can’t wear the same things normal sized human beings can get away with. And not only are you tall, but you are shaped like a muscular string bean, so clothes just kinda hang on you. You have a tendency to get it half right- half right meaning the top half of your fit because WHAT IS UP WITH THESE JOHNNY APPLESEED INSPIRED PEDAL PUSHERS PAIRED WITH THESE VICTORIAN BOOTS?

Honestly though, the boots are fine, but with something else. These 1904 britches? NOT the move cutie. Whichever one of your fashion industry friends told you that was hot, needs to be banished from your circle immediately. Not to mention your fineness factor drops from 9.8 to an uncool 7 with this mess on.

And the number ONE fashion offender shouldn’t come as a surprise to anyone:

Dude was photographed at the Kids Choice Awards wearing this haute couture genie in the bottle look. Great, so now little boys will see him in these tight azz pants and think it’s perfectly normal for a heterosexual man to wear clothes that errs on the side of femininity. Hey, supposedly he has a girlfriend *rolls eyes* (click here to see). And I may get heat for this, as well as the speculation, but that’s why it’s called MY opinion. 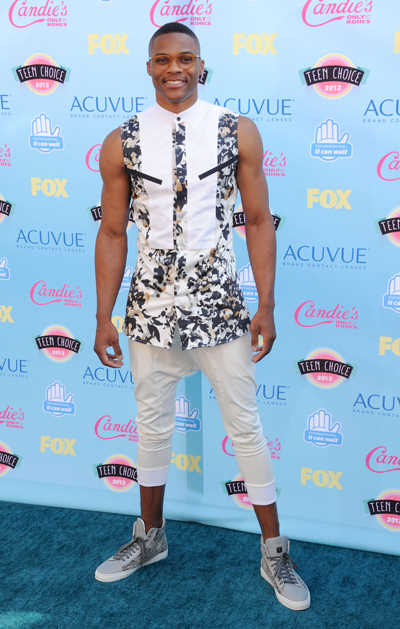 #6 Well at least he matches… #SaySomethingNiceChallenge

And please don’t even start with the “This boy LOOOOOVVES fashion” defense. We can see he loves fashion by the clutch he’s holding below… And sidenote: if a man + purse = murse, does a man + clutch= mlutch? This simple math has me all kinds of twisted… What I don’t get is the type of fashion he loves. I just really don’t get the sex appeal of a man that wears clothes that are as tight as my own.

Do you? Do any of you get this my friends? Newsflash: You are a man Russell! There’s nothing wrong with wearing things that fit, but you do not need to accentuate every curve! Leave that to us ladies, for real! Okay this look isn’t too bad minus the mlutch. BUT these damn Johnny Appleseed pants will just not go away… It’s a straight up epidemic. Where dafuq are these b-ball players copping them from..some super exclusive underground Big & Tall distributor? Or does Russell borrow his from his giiirrrlllfriend?

My guess is that they go to Canal St in SoHo, and get them from one particular Asian man screaming “handbag!? handbag?!” that they inconspicuously follow up 6 flights of stairs in a random building to a small room packed to the brim with these ugly things…But I digress.. 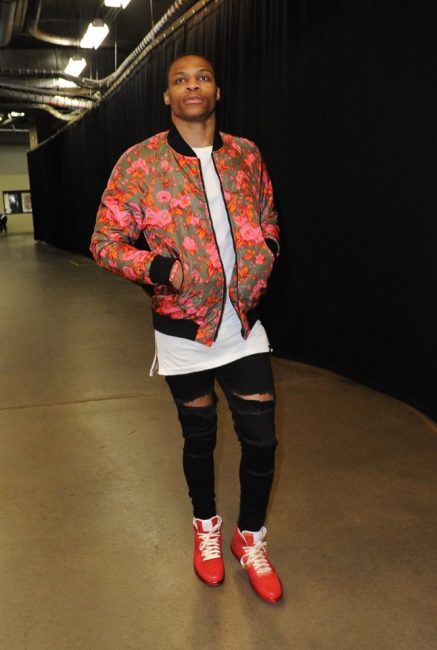 Um excuse me, miss? Your pants are tighter than mine…And right here you are looking a bit crackish-size zero if you catch my drift. Look okay, I’ll say something nice: Russell, you have thee ultimate confidence….And uhh at least you didn’t pull a Tim Duncan. But I can’t say anymore honestly. Your ensemble says it all. So you do you boo. But answer this one question- can you “and yours” breathe?

For all of you men out there hoping to copy this fashionisto, get your notepads and pens out huntaay! Here, Westbrook spills that tea on his fashion evolution..bahahahaha.

GQ: When did you get interested in fashion?
Russell Westbrook: Just growing up. My Mom and I shopped all the time, she shops all the time, and I was always into fashion. I’ve been blessed to be in a situation where I can now buy some of the things that look good.

GQ: Were you like that in high school and college too? Were you concerned with the way you looked then?
Russell Westbrook: In college I didn’t dress up every day, for class or stuff like that, but when it came time to do certain things I’d dress up for sure.

GQ: What did you wear to the prom in high school?
Russell Westbrook: I had an all-white tux with a turquoise vest, and some white-and-turquoise Stacy Adams. I won best dressed at prom.

GQ: Did you win best dressed in the yearbook?
Russell Westbrook: No, I didn’t because in high school I didn’t dress up every day. I’d just wear basketball shorts. I could have tried if I wanted to, but I didn’t.

GQ: Do you make an effort to dress up every day now? Or are there still days when you just throw on shorts and sweats.
Russell Westbrook: For practice I’ll throw on sweats, but any time I’m going to events I’ll dress up. I mean, I buy so many clothes, I’ve got to wear them somewhere.

Oh and you certainly be wearing em’.

I’ve done ripped these guys to shreds, so please type something pleasant to say about one of these pictures with the picture # in the comments section below.