My Rant: Leave Blue Be! 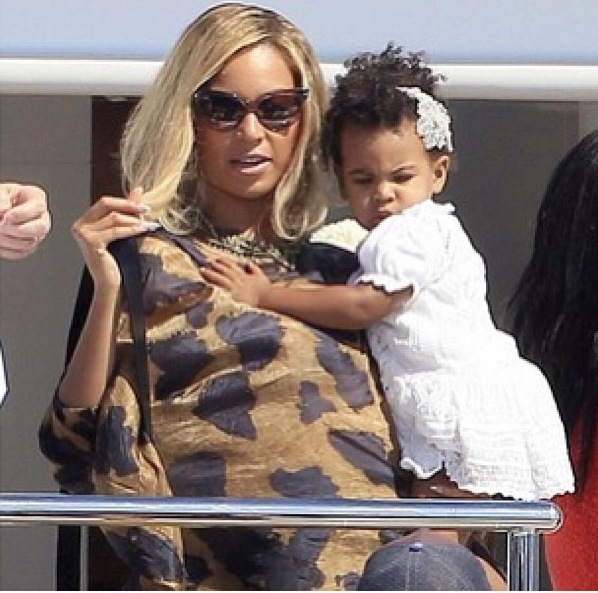 Why oh why are people making such a huge azz deal about how Beyoncé does (or doesn’t do) Blue’s hair? And I dare someone say I’m asking this question because I’m Beyaki’s biggest stan, because I really am far from it. I just don’t understand why people are tearing her to shreds because her baby’s hair isn’t “done”?

From the comments on an article from a natural hair blog I often visit, in addition to other sites, the net has been set ablaze with everyone asking “Why doesn’t she do her hair?” What is there to do exactly? Blue has only been on this earth for a year and some change, and she needs to look paparazzi presentable at all times? And y’all wonder why she has a permanent scowl.

As you may have seen from this blog, you already know I’d be the first person to call something out, ESPECIALLY if it’s trifling. But what is really trifling is how many women are in a uproar about a baby’s 5 inches of hair. Y’all act like Bey slapped some Just For Me box kit relaxer or a half wig on B.I.C’s head.

“But Beyoncé is rich, she can at least afford someone to do her child’s hair, even if she doesn’t have the time to….”

“Beyoncé wears weaves all the time, so she probably doesn’t know how to do Blue’s natural hair since she doesn’t have experience doing her own.”

Could Beyoncé put a headband on blue’s hair? 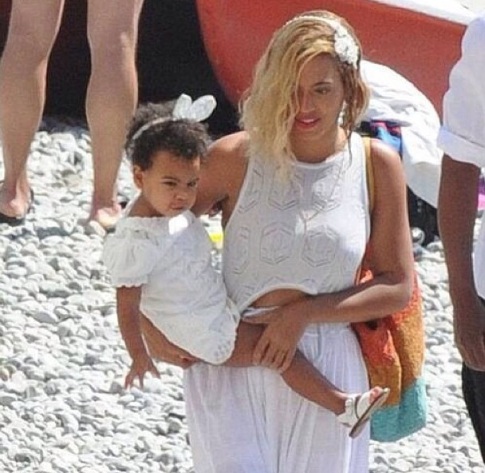 Or could Grandma Tina tap into her ex-hairstyling days, and slick her hair up into a mini bun with a cute little bow? Sure. Can they also leave her hair out wild and free? Of course they can.

How about you ladies worry about the hair on top of your head? A lot could be said for some you grown women who don’t even know how to do your own natural hair…..let alone know what your natural texture looks like…..especially when there is a plethora of information from Youtube tutorials, meetups, online forums and blogs at your fingertips to figure the ish out. 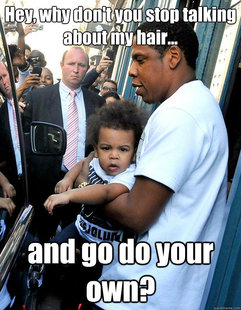 And I’m not trying to act high and mighty. Shoot, I had a relaxer for the majority of my life. But I know I’m the last to be expressing how a child’s hair should be done. In the 2 years I’ve been natural, I’ve had to basically start from scratch myself when it came to learning my own hair.

All in all, she is a mere 20 months old. And just like all 20 month year olds can get away with wearing clothing from the opposite gender, walking around barefoot, and eating with their hands, they can also get away with their hair not being “done” or to the standards that you all wish Blue to uphold. And if y’all really wanna talk about something, let’s talk about how her permanent scowl is really a result of her inherited furrowed eyebrows from Hova (I kid, I kid, I actually love her brows!)

What do you all think about what people are saying about Blue’s hair? Do you agree with them or disagree?