WHY SO SAD KIM?

I guess she never fired who was “running her shit”….Hmmmm…..

While Kim K’s attempt to “break the internet” with her backside nude pic was an E for effort,  last night, I still went about my daily duties on the computer with no hassle at all. I processed orders at work this morning -all on the internet, Facebooked, tweeted, and even posted my previous post  to this one (which you all should read) less than 45 minutes after her full Brazilian butt lift glory hit the net. #NiceTryKimmy

Sidenote: Approximately an hour ago Paper Magazine released the full frontal nude of the image, a 2nd attempt at breaking the internet perhaps? So if you are reading this post, you know she didn’t succeed in her efforts.

But what has been getting me the most about this whole situation is that, people have been in an uproar about this. “Oh but Kim’s a mom now!” and “What message is she sending to her daughter?” etc, etc.

WHY IS THIS SO SURPRISING TO YOU ALL?….really why?

So to me Paper’s whole wannabe classy version of a Playboy cover is just a downgraded way of her “career” coming full circle. In the last 7 years since her sex tape was released, her and her family have done nothing but proven that they’ll take fame and exploitation over standards at any cost. You should’ve asked yourself what message she’s sending her daughter by propelling a career off of hoeing. And while I applaud (and I say this word very loosely) the family’s hustle and ability to game America into believing they are worth watching every week, I am not the least bit shocked over anything they do because at the end of the day, it’s all for two things and two things only: NOTORIETY and a CHECK.

It’s just too darn bad that this particular project wasn’t thoroughly researched by her camp prior to agreeing to do this (or was it?). According to thegrio.com, they say that miss thang is the butt of an old racial joke (pun?) as seen here: 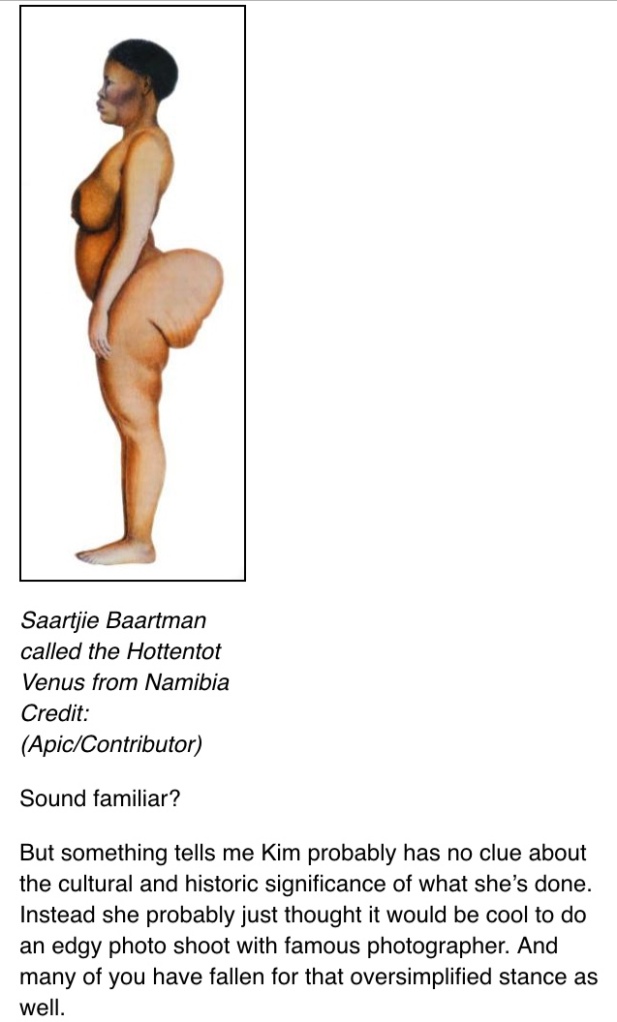 The rest of the article is pretty on point with explaining why the magazine’s photographer took those original shots years ago. You can read it here.

What’s equally interesting to me is how much Kanye is enamored by her. How does a man support a woman who clearly uses her store-bought assets to fund her lifestyle, when his mother died during her own cosmetic surgery procedure? #ByeFelipe

But hey, I shouldn’t be surprised. Kanye “The Contradiction” West found his “soulmate”, quite possibly the female version of him, a mirror image of contradictions.

And if it’s a fact and not just some major coincidence that Kim is the butt of this historical reference, I’m the least bit bothered. When have people not done ignorant things for money? Ignorance does NOT shock me. And it shouldn’t shock you either.

And if you are shocked, then I’m gonna need you to check yourself.  If you are sitting there thinking that the 2014 Kim K. has grown as a woman, and would not exploit her body when it has continuously proven to benefit her monetarily and economically, just because now she’s a mom, then you have given her more wayyyyyyy more credit than she deserves.

And her mission has been accomplished.